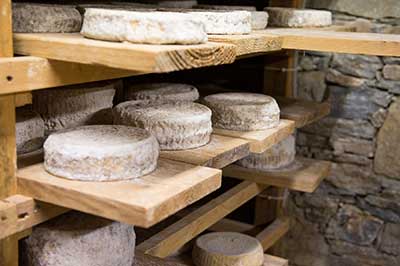 Previously known as the " île des bergers (shepherd island), Corsica maintains a strong sheep and goat rearing heritage; the long tradition of dairy production which is perpetuated through the continued used of old Corscican breeds. This heritage gradually developed thanks to the island's mountainous landscape: the rearing of small cud-chewing livestock is one of the most profitable uses for this type of terrain.

The island’s herds are nourished exclusively on pasture. The richness of the island flora plus its regional diversity and ample vegetation combined with the Corsican practice of flock migration contribute to producing a completely unique type of milk – unparalleled in terms of smell, taste and texture.The use of indigenous breeds for farming in conjunction with time-honoured practices give Corsican cheese its distinctive character, unlike any other in the Mediterranean.

Traditional farm-produced cheeses are made according to a specific formula. The cheeses are all high in rennet content, soft ripened with a washed or mould rind. Different regional varieties can be found throughout the island: "Niolu", "Casgiu Vechju di Calinzana", "Bastelicaccia" and "Venachese". However, there is, of course, always one exception: "Casgiu Sartinesu" - a hard, pressed, unpasteurized cheese.

Cheese made from goat's milk is stronger in flavour compared with varieties obtained from sheep's milk, which are generally milder.
The cheeses are first shaped using traditional "moulds", then extensively handled during ripening. When eaten young, they have a light milky taste with a nuance of hazelnut. During ripening, the cheeses are infused with mild spices, preserved meat and cocoa, providing the distinctive flavour that places them in a category of their own. Some of the cheeses are traditionally eaten with fig jam - perfectly complimenting their bold flavours with a touch of sweetness.

In order to safeguard the cultural heritage and gastronomy of the island, steps are being taken to obtain CDO (Controlled Designation of Origin) certification for Corsican cheeses.