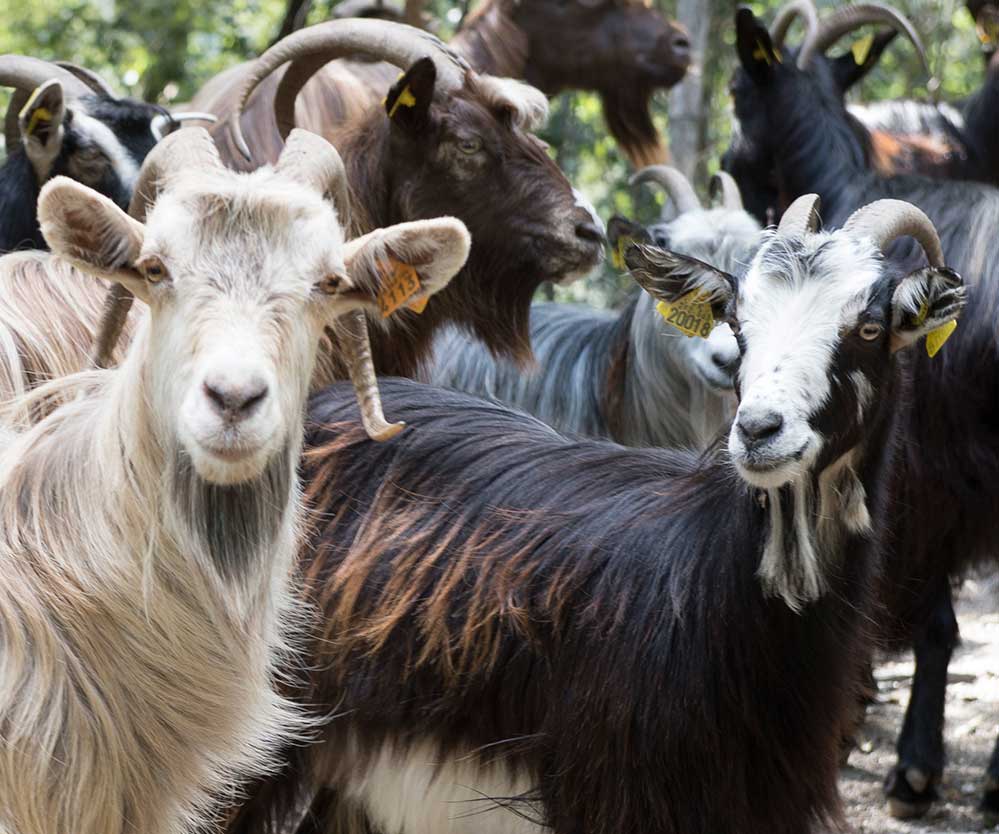 The Corsican goat (A Capra corsa) has been on the island for thousands of years and now accounts for almost 98% of the region’s goat population (more than 45,000 animals, including approximately 33,000 mother goats, according to Agreste).

The average size of this island goat race: a female weighs 30 to 40kg and a male between 45 and 60kg. With a narrow head and small ears, the Corsican goat has parallel, curved horns and long hair of various colours: black, red, fawn, variegated white and mottled.

The Corsican goat is a dairy animal characterized by its hardiness, adaptability to the climate and island environment, and its ability to thrive in the brush. Its long hair provides protection from thorns while robust limbs and powerful hooves enable these goats to move easily on difficult terrain. The average milk production per lactation period is 181 litres in 205 days of milking.

As the only commercial use for the island’s steep hills, which are not suitable for cultivation, goat herding seems to have existed since the dawn of time in Corsica. Herded ("greghje") over two distinct types of terrain - plains and mountains – and through vast expanses ("rughjoni") or otherwise "tethered" around the villages, the Corsican goat has been a continual and integral part of the life of the local population. Goats have contributed to the food supply (milk, cheese, meat) and their fur was used in the manufacture of clothing ("u pilone"), blankets and rope ("a funa"). Their horns have been used to make knife handles and musical instruments ("a pifana") (Bouche et al., 2002).

Of nobler status in past times, due to the use of its milk for human consumption (feeding children), goat farming has seen a decline with the increasing preference for dairy sheep over the past century. With the arrival in Corsica of agriculturalists from the Rayon de Roquefort, sheep began to monopolise the market economy (commercial trade), confining goats to the island’s domestic economy (barter and payment in kind). The most productive pastures were assigned to sheep, as highly profitable sources of income, relegating goats to the steepest brush slopes. This uneven distribution forced the goatherd into isolation (watching and guarding the flock), to the point that the goatherds were deemed unsociable, and even resistant to organization (Bouche et al., 2002). According to Daniel Sabiani, former president of the goat breeders union (Capra Corsa), "the goatherd has a very positive image culturally, but a socially difficult one."

Measures to save the Corsican goat culminated in June 2003 with the official recognition of the island goat breed by the Ministry of Agriculture. This recognition has led to the production of goat milk being required in the specifications for the Brocciu AOP and began a certification process for the goat kids and cheeses.

Widespread goat farming is primarily centred around extracting value from rugged, scrub-covered terrain. Herds move and grow all year round. Pasturing of the herds is done on a much smaller scale than before because the development of the coastal plains favoured the settlement of goatherds; today 90% of herds are affected by this situation. In Corsica, the pasturing cycle is "reversed": goatherds live in mountain communities. In summer they feed their flocks around their villages or on grazing land belonging to them. From October to May, they go down to the lower areas and the coast, where natural resources are more abundant.
Approximately 80% of goat farmers are farmhouse producers. They make several types of cheese, including brocciu, made from whey and certified by an AOP label.

Milking runs from mid-January to June. Naturally out of season, 85% of kidding now takes place in autumn (late October, mid-November).