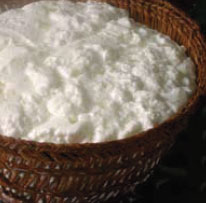 No, Brocciu is not the Corsican word for “brousse” (brush). Brocciu can't be translated. It's Corsican, and that's all there is to it. The plural form is Brocci (pronounced “brotchi”), because one is never enough!

Brocciu production begins in November, after lamb and goat weaning, and ends in May/June, when the milk becomes less rich. Brocciu must contain at least 40% fat to satisfy CDO requirements. A product that contains less then this amount would be referred to as “brousse”.

Brocciu can also be further processed. The surface is dry salted following a 24-hour draining process before being placed in a cool room where it’s  left for a period ranging from two weeks to several months. Depending on the amount of salt added and duration of treatment, the resulting Brocciu is called “passu”or”sec”.

Brocciu can be enjoyed with local pastries (fiadone, imbrucciate etc.) or used for as an ingredient in dishes (stuffed artichokes, mint omelette etc.)

It can, of course, be savoured just as it is, though - perhaps with a dash of myrtle eau-de-vie!