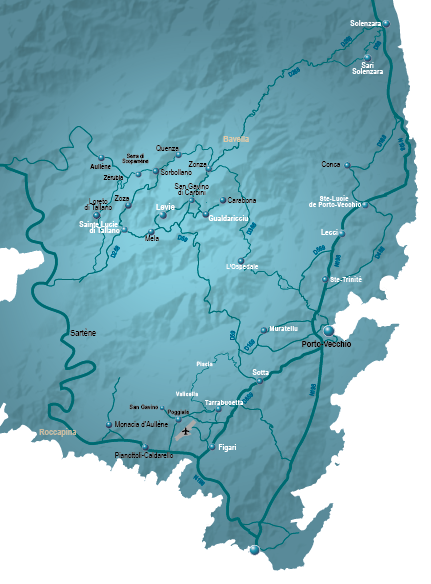 The Lion de Roccapina looks out over the sea, with its mane represented by the remains of an 11th century Pisan Castle. Shaped by the slow erosion of granite, these images fuel the imagination of visitors setting off to discover the Far South. Travelling down this untamed coast, still ruled by plants and wildlife, it’s clear that the force of the Southern lands has come into its own!

Just a stone's throw from the fascinating mediaeval city of Bonifacio and the attractive town of Porto-Vecchio, Mount Cagna watches over the vines and pasture land of the gentle Figari plain. The bewitching perfume of the much sought-after A Muredda Corsican Immortelle, or straw flower, leads to the magnificent Ospedale pine forest. Then comes the proud Alta Rocca, the aptly named "Terre des Seigneurs", at the heart of Au-Delà-des-Monts, which will satisfy all curious travellers. Welcoming villages, outstanding natural landscapes and archaeological sites are at the heart of a strong pastoral tradition, still visible on the Cuscionu, the largest summer pasture plateau in Corsica, renowned for its transhumance. If "real progress is tradition that continues", then olive growing in Alta Rocca is a living example.

The Lion de Roccapina; the fort and cliffs of Bonifacio; the citadel and salt marshes of Porto-Vecchio; the many Genoan towers; the Bavella, Sambucu, Asinau and Ospedale Forests; the Cuscionu themed path; the Quenza heritage trails; canyons; Piscia di Ghjaddu waterfall; Viseu racecourse (the highest in Europe); Lévie Prehistoric Museum; the prehistoric sites of Cucuruzzu Capula; the castelli of Araghju and Ceccia, and the Sainte Lucie de Tallano olive tree eco-museum.