The Corsican horse is farmed (u Cavallu corsu) throughout the island. Several populations of feral or wild horses exist, especially in the Massif de Tenda, on the foothills of Cintu, in the Alta Rocca and the pastures of Olmi Capella. 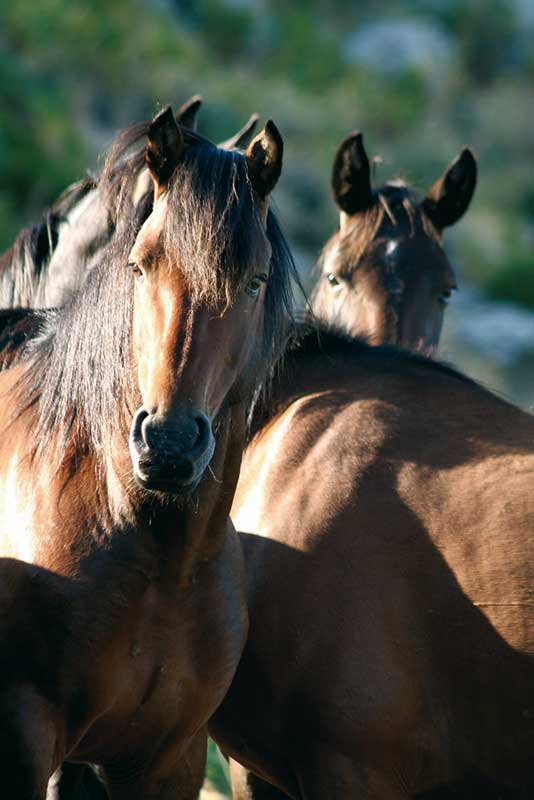 The colour of their coats may be black, berry and brown-berry, sometimes with a dark line extending from the mane to the tail, called a "dorsal stripe". Some have a white spot, called a balzane on the lower extremities (pastern), but this feature is not desirable. The horses have manes varying in size between 1.30 and 1.50m, and weighing between 300 and 400kg.
The head is expressive, rather short, sometimes a little heavy but tapering towards the nose. It has a straight shape, open nostrils and bright eyes. The ears are small and straight. The neck is short and wide, but not stocky, well aligned, with strong but not prominent withers. The back is relatively short and well-supported, and the shoulders quite long, allowing for good girth. The body is well proportioned with fine, dry and strong limbs. The legs are black, small and with hard hooves.

The Corsican horse is fast-paced but not excessively low to the ground. It is, in fact, quite tall with good engagement (propulsion of the hind limbs). Its temperament is lively and generous, brave and measured. It is described as rustic, sober and robust. U "paganacciu", as they are known, are draft horses, tough and clever, making them a very versatile saddle horse.

“Corsica is an almost entirely mountainous island, not terribly fertile and thinly populated.
However, this island has four gifts from nature:
A horse small in size, slight in form, but tireless at work, made of iron.
Renowned guard dogs.
Strong wine, full of body, which the powerful of this world have at their table.
And finally, mighty, impetuous menfolk, strangers to rest
So much so that the Corsican militia have always been held in high repute in Italy and elsewhere.”

Translation from Latin of a text dating from the fifteenth century and appearing on a tapestry in the Vatican.

When did horses first appear in Corsica? Several theories have been advanced: palaeontologists hold that a small horse arrived there between 2 and 25 million years ago, during the Pliocene and Miocene eras. A skeleton similar to that of Cériolé was discovered in Corsica, and aged at 4 million years BC. The second theory places their arrival in the Pleistocene (1 million BC); geologists point to the fact that Corsica, Sardinia and the Ligurian islands of the Tyrrhenian Sea were joined together by a platform (called the Tyrrhenian shelf). Thanks to this shelf, a breed of ponies with flat faces appeared in Corsica, northern Tunisia and central Europe. They resembled the ponies of India, and shared the same origins: the ancient Aryan horse (of Indo-European origin). And finally, the third theory, which is not inconsistent with the second, based on historical writings, of which the oldest is that of Procopius, the Byzantine historian who, around 536 BC, observed that "on this island (Corsica), is a breed of horse barely larger than sheep." (Halgand, 1990)

The presence of the Corsican horse is attested to by numerous written and iconographic traces throughout the centuries. In the eighteenth century, Abbot Gaudin wrote "We are amazed by the skill of these horses... It is wonderful, and curious, to watch them face so many difficulties, and see them carefully navigate those that we fear the most. In perilous passages, they stop, assess the land before them, and advance a suspicious foot, always ready to withdraw if there is danger, balancing themselves with their hind legs so as not to be swept away."

Before the First World War, the horse was nicknamed the Corsican pony, so diminutive was its size. We have the 1916 account of an observer predicting the disappearance of this little horse due to its popularity, especially for luxury pursuits, for which it was very popular with women who appreciated its appearance and vivacity.

The horse, nicknamed "u paganacciu", i.e. the pagan, due to its rebelliousness in contrast with beasts of burden, plays a major role in Corsican society and accompanied the island’s population through the centuries, both in the fields and mountains, in peacetime and during wars. Nor is the horse a stranger to military renown. In 1768, after the victory of the Corsicans in Borgu, two officers reported:" We were charged by riders mounted on ponies. They galloped over land that we could hardly walk through."

This horse has been formed and shaped by a harsh island environment from which it drew strength and character. Filled with enthusiasm and vivacity, and with an outstanding mind, it has become famous for its impressive hardiness and constitution. 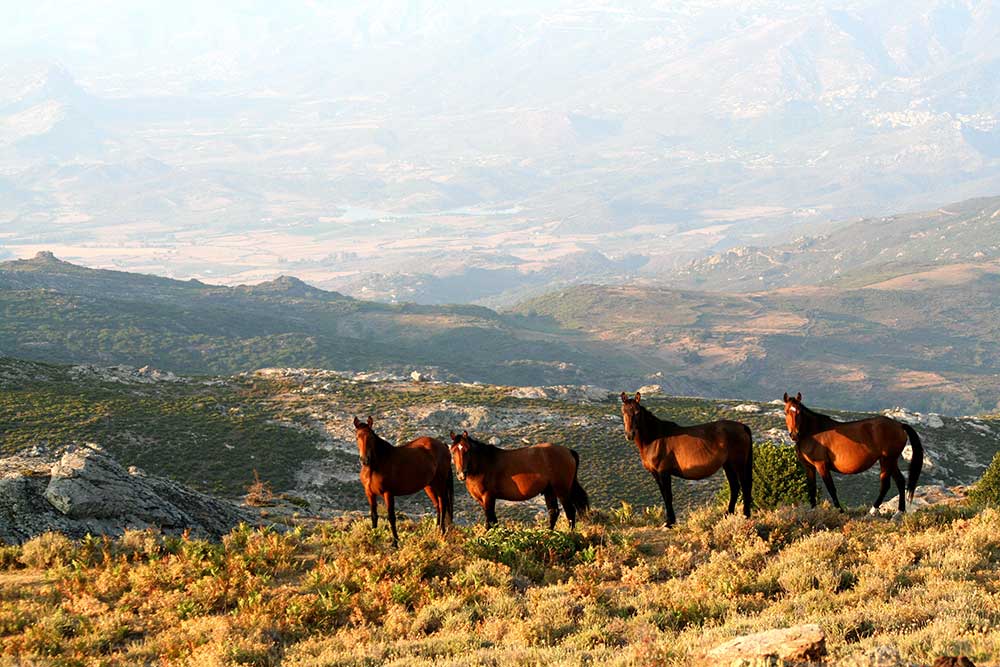 The Corsican horse has received recognition through the work of the U Cavallu Corsu association, which focuses particularly on the economic aspects of certification. The use of the horse is a driver for the development and revitalization of rural areas. This activity is an important means for the diversification of rural areas. It encourages young farmers to work in the equine industry and can also be a source of additional income. Furthermore, the presence of the Corsican horse in its natural habitat, when managed correctly, in mountain pastures or in the foothills, hills and high mountains, promotes a return to using abandoned areas and generates a movement towards quality agritourism.

Finally, the Corsican horse, the capabilities of which are no longer in doubt, can play its part in leisure activities (walking, sports, etc...) satisfying both beginners and experienced riders. And, being particularly suitable for "endurance" riding, the horse might also be used in competition one day.