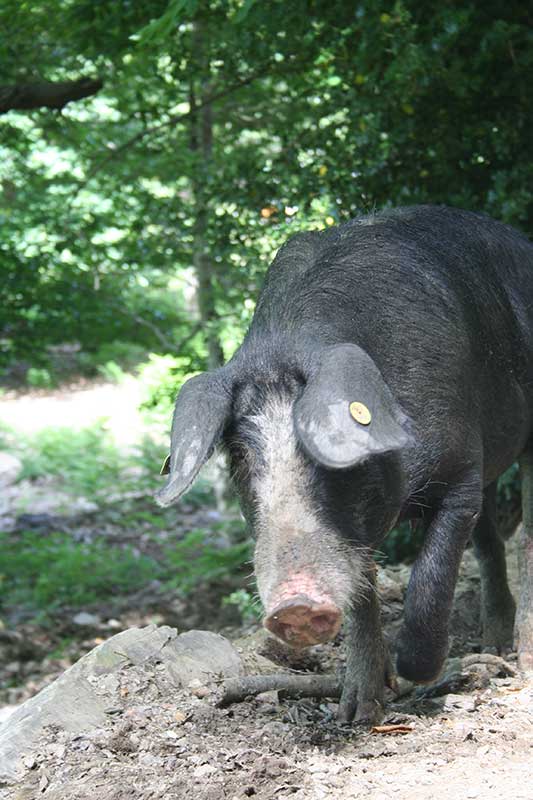 Corsican pork (u porcu corsu) has been on the island for thousands of years, since it replaced the Corsican wild boar (which has returned to the wild) on farms (Vine, 1988). After undergoing a large number of crosses with selected breeds during the second half of the twentieth century (Large White and Duroc mainly), there has been a restoration effort to help increase purebred numbers. Its use on farms has been increasing since its official recognition. It thrives in all traditional areas of production (mountain massifs).

The Corsican pig breed has a small average size: an adult female weighs 140 to 180kg and a male 200 to 240kg. With a thin, elongated head, a mobile snout and semi-drooping ears, Corsican pigs sometimes have spines along the backbone and pendants (i pindini). Their colourful patterns are varied, but generally composed of the following colours: black, red, grey and agouti. Hogs may have white on various parts of the body: waist, head, liste en tête, feet etc.

The Corsican pig is an animal that grows slowly characterised by its hardiness and capacity to travel long distances. Raised in extensive pasture and forest systems, it favours these areas, as well as chestnut and oak forests during autumn. It also thrives in summer grazing grounds during the summer pasturing period in areas of high altitude (between 1,500 and 2,000m.)
It is capable of surviving periods when natural resources are in short supply by using its reserves, enjoying compensatory growth during times of abundance (autumn finishing period). It reaches its slaughter weight (between 100 and 130kg live) at the advanced age of 15 to 18, or even 24 months.

Corsican pigs were an important animal throughout the island’s traditional rural period. Pigs were kept in all peasant family homes due to them eating all the waste from the kitchen, and indeed, all digestible matter. At least one mannarinu was kept by every family to be shot around Christmas (traditionally, slaughtering began on the Santa Lucia, December 13) and used to make cured products to be consumed during the year or even, in the case of dried ham, the following year. These products were an important part of the protein and animal fat supply for the rural people of the uplands.
These animals were bought by farmers as piglets at weaning around March (u marzulinu) from breeders (u purcaghju) who kept herds of sows in the forests (porcu di banda or porcu di furesta). These breeders would lead their animals over extensive stretches of land and slaughter their pigs at a later stage than the mannarinu.

Following the gradual disappearance of rural communities (and consequently the mannarinu), it is the breeders who have survived up to modern times as producer-processors. They take their herds (greghje or rèfiche) over vast stretches of land (rughjoni) with the help of "leading" sows who know the route and marshal their companions, ensuring they learn where to eat, drink and sleep. The breeders finish their stock (porchi tumbatoghji) in preparation for slaughter in the autumn in chestnut and oak forests, in order for the pigs to eat starchy foods (chestnuts and acorns) in large quantities. This particular diet causes lipids to build up in muscle tissue (intramuscular fat) and fat whose fatty acid composition identifies the animals as having been raised in the particular fashion described above.

Following the slaughter of pigs, the producer processes the carcasses into traditional foodstuffs. Ham (u prisuttu), spare rib (a coppa), loin (u lonzu), chest (a panzetta) and throat (a bulagna) are all salted and dried. Processed products such as sausage (a Salciccia or u salamu), liver sausage (u ficatellu), fat sausage (a salcicetta) are inserted into various materials. Baked products such as blood sausages (i sangui), brawn (u casgiu di porcu) and stuffed stomach (u ventru) are cooked. All rural families would prepare such a range of products at the time when u mannarinu was widespread.

A mounting desire to save the Corsican pig led in 2006 to the official recognition of the Corsican pig breed by the Ministry of Agriculture. The breed took the name "Nustrale", to avoid any possible confusion in view of an application for an AOC for the salted and dried produce prisuttu, coppa and lonzu. The request, submitted to the INAO in 2004, was completed in 2012. 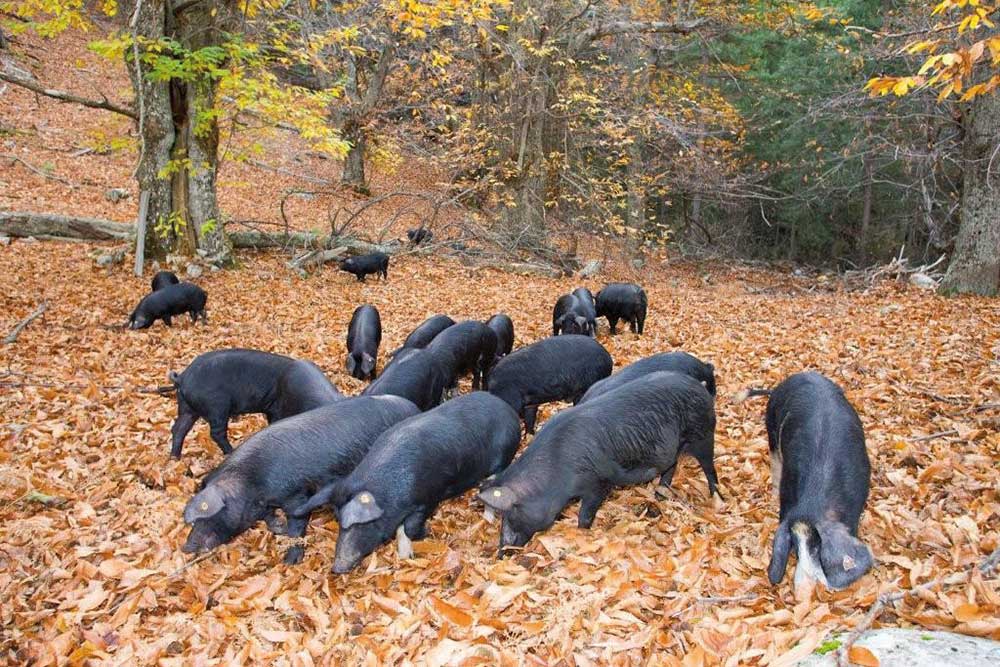 Wide-ranging feeding patterns see pigs primarily based in hilly, scrub-covered areas. Livestock remain outdoors all year, with the exception of sows at birthing time, which often occurs in sheds. The key period of the year is the autumn finishing, when the pigs primarily are fed chestnuts and acorns, and after which the animals are slaughtered and processed into meat products.