Corsican market gardeners adhere to a responsible farming ethic, placing emphasis on the well-being of their environment. This commitment is demonstrated through their implementation of an integrated organic initiative and a waste recycling scheme.

Local growers endeavour to grow specific varieties in order to offer produce famous for its exceptional quality and taste. Fruit and vegetables grown in Corsica are generally much tastier and fresher than those from other areas: they are picked when fully ripe and arrive straight on your plate directly from the producer. 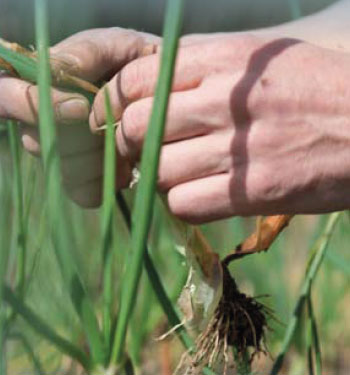 Grown in the area of Corsica bearing the same name many years ago, it is now more commonly known as the Sisco onion due to its prolific growth there. It progressively died out during the rural decline of the 20th Century when people moved away from the Cap Corse area. It is, however, making a particular comeback in this smaller region.

In terms of aroma, the Cap Corse differs from other onion varieties thanks to its greater sweetness, milder tear effect as well as the proportion of original aromatic components. This completely unique onion variety is inextricably linked to the Cap Corse area.

It is sold fresh from July onwards, just before reaching complete maturity. In its longer lasting form, it can be bought as of mid-August after drying.

Organic saffron - Dining at the farm