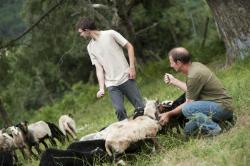 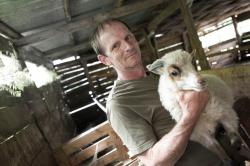 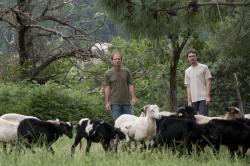 Visits : From december to june

It is 1970 and a young German discovers Corsica and falls so much in love with it that he ends up settling there after an encounter with an old Venaco shepherd, who passes on to him his knowledge of sheep farming and of the Corsican mountains.

Several years later, he falls in love again, this time with a young French girl who had travelled to Corsica to learn these skills. Harry and Françoise lay down their backpacks for the last time in Muracciole, and become Corsican shepherds!

Although initially things were difficult for the young couple, their love of their work and Corsica has always reassured them that they had made the right choice.

“When we first arrived, we were warmly welcomed by the locals. Later, we were complimented on the quality of our products, and that was really encouraging!”

There is unanimous agreement about the quality of their cheeses, which have won several awards at the Venaco Cheese Fair.

The Loefgens are fully integrated into the Corsican lifestyle today with their son, Romain, the successor to the business, who has begun to diversify the business by setting up their first beehives.

For further details, please complete the following form. We will reply shortly